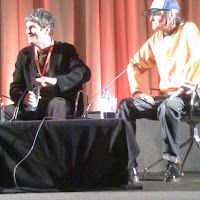 Paul Kelly's Lawrence of Belgravia eschews archive footage and instead guides the philosophical narrative along with the thoughts of Lawrence himself. Ripe with sagacious and whimsical aphorisms from one of the musical geniuses of the past twenty-five years, the film is both sensitive to Lawrence's mindset ('I'm legally bonkers'), while also serving as a glaringly bright spotlight for an ageing artist.

The film's title, Lawrence of Belgravia, is apt. Lawrence was born in the glory-free Midlands when Lawrence of Arabia was dominating the paying cinema-goers. 'My brother was lucky. He was called Sam, he's a builder', he comments. A clue here: the film title mirrors the antipathy he feels towards the perpetrators of his upbringing, while being blithely self-aggrandising.

Kelly, as is evident with previous works such as Finisterre (with Kieran Evans), likes his gritty, high-rise London shots. A long-time resident of London's Clerkenwell, he lives a block along from Lawrence. Their part of town is high-rise, dense and in the middle of a conflation of media offices and brutalist social housing.

This project has been over five years in the making. Progress was slow and impeded in part by the inflexible pace of Felt's former maverick. (Kelly told me he would text him, look out of the window, see Lawrence on a distant flat balcony pick up the phone to see who it was, and subsequently watch him hang up).

During Saturday night's Q&A session, Kelly was asked 'if he had known how long the film would take to make, would he have carried on?' Clearly moved by Lawrence's reaction to the film (Lawrence hadn't seen the film in its entirety before the premiere) said: 'if you'd asked me yesterday, I would have said no. But today, I'd say yes'.

Whatever your preference in terms of his career trajectory, from the semi-goth beauty of early Felt, to the manic, inscrutable electronic joy of Go-Kart Mozart, musically there's a distinct unifying thread in the film. In the parting shot, we're reminded that despite his reluctance to revisit earlier styles, a core, soulful darkness remains. Buried in the daftness of his eclectic songs, there's pathos.

Lawrence of Belgravia feels like a refreshing pat on the back of the finer, if extreme, points of English eccentricity. Lawrence is cocooned by his loneliness, by his projects, by his unflappable belief that although he has nothing in material terms, he knows exactly who he is. If he was wealthier he could almost be seen as the Edith Sitwell of low art.

There's plenty of laughs in this film. Kelly is an impressive and gentle artist, but he also has an astute sense of humour. There's little room here to be be sad for a skint and under-appreciated artist because Kelly has too much respect for him as a thinker and instinctual communicator.

Lawrence of Belgravia is showing now at the London Film Festival.
Posted by Suzy Norman at 05:58 No comments: 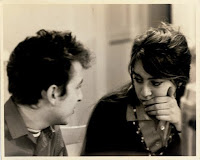 On my other blog, Heroine Addict, I remember Suze Rotolo.
Posted by Suzy Norman at 12:07 No comments:

A sort of modern day Plutarch's lives, the blog's a chance to wax lyrical on the women who inspired us.

Men are welcome to read and comment too of course.

To celebrate its return, Planet Mondo has kindly popped my piece on Hazel O'Connor here.
Posted by Suzy Norman at 08:08 No comments: 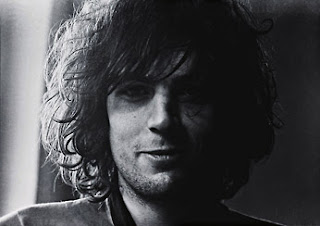 
Luckily I stole into this exhibition the day before it closed. Tipped off by a friend, he felt I should know it was on, and that it wouldn't be on beyond the weekend. I'm glad he told me.

The exhibition was a unique opportunity to see Barrett's artwork and read his personal letters. With the full cooperation of his estate, it's unlikely we'll be treated to something on this scale, and this intimately personal again in our lifetimes. It was a privilege to attend.

The standard of his artwork was variable, but when his canvases were good, they were highly accomplished works, and in a different league to exhibited works by the likes of Bowie and Dylan. Barrett studied under a scholarship from the prestigious Camberwell School of Art and Crafts, and unlike other rock star artists - due to his reclusive life, his return to and dedication to the craft is unparalleled in the music world. In a nutshell, the main reason for his superior work is that he had a firm grounding, followed by uninterrupted time to develop and become really good.

And you can see progression. The bolder, playful colours of his earlier works become darker, but sharper. There is clever use of perspective. One grey painting of a piece of barbed wire is finely honed in the centre, as if photographed by an expensive lens, with the surrounding area blurring into emotional abstraction.

A grid-inspired lino print is cleverly orchestrated - deceptively simple in pattern, with a blackish hue, yet every square is fully planned before setting lino to paper.

But sadly too, you can also see decline. As his health and will began to ebb in the closing year of his life, his work returns to an earlier boldness, but the handful of still lives are unfocussed. They're unremarkable, the brush strokes rushed and artless, and you can sense the love is fading.

In a room of their own are the early love letters he sent to girlfriends Libby Gausden and Jenny Spires. Barrett is a man with a soft heart. His handwriting is skittish, his prose and surreal poetry are punctuated with accompanying doodles. This is the hand of a doting sweetheart. The letters are of interest, not just because they're letters from him, but because on another level, they're a reminder of how pliable the heart is before maturity teaches us emotions aren't everything.

Seeing his heart fully open and bursting not only with love, but with a protective air over his girlfriends, induces a genuine sense of melancholy for his vulnerability and intensity. For a brief time, we're free to reflect on how idealistic love seems to be a privilege of the young.

In all sincerity, this was a beautiful exhibition and an unexpected window into those secret years, and formerly, an innocent mind.
Posted by Suzy Norman at 12:26 No comments:

In 1979, Lester Bangs put these lyrics and this poem side by side.

It's nice to occasionally stop and look closely at a well-crafted lyric.

My heart of silk
is filled with lights,
with lost bells,
with lilies and bees.
I will go very far,
farther than those hills,
farther than the seas,
close to the stars,
to beg Christ the Lord
to give back the soul I had
of old, when I was a child,
ripened with legends,
with a feathered cap
and a wooden sword.
Federico Garcia Lorca
Posted by Suzy Norman at 15:27 2 comments:

What I think of that new Elbow album. 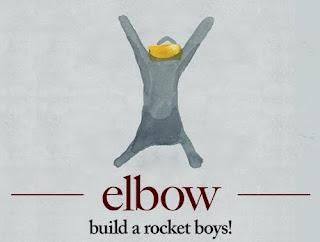 If strenuous records are anathema to your ears, you might not go in for Elbow singles.

But, with this in mind, you may decide this is why Build a Rocket Boys! works. Elbow are a band at the top of their game but this album is not about cynical, grandiose thinking and meaty chart fodder. Unlike 2008's comparatively noisy, The Seldom Seen Kid, you'll find softer layers here. There's spades of ambition but it's deftly achieved and luckily they're not afraid to make an album that whispers.

If so far, you haven't been drawn into the hype around Elbow, be prepared to overlook some of their singles and use this as an excuse for a turnaround. In any case, this album isn't about the chart releases.

Lippy Kids is searing, swirling and harmonious. From an album released at a comfortable stage in their career, this song is as humble as it is prepossessing. Reassuring, is their determination to put the effort in, now as much as ever and Garvey knows his music. A staid radio presenter - his slot on BBC 6 Music can, notwithstanding, be an education.

I miss your stupid face, he crows, in The Night Will Always Win. In keeping with Dylan's Idiot Wind from Blood On The Tracks, the memory of times past is still raw and there's a nice down-to-earth candour.

Jesus is a Rochdale Girl rocks us along in its carriage, but simpers out to a shadowy conclusion and fitting in with the smooth ride of the album, the ending is effective.

The steel band in In With Love, is an interesting, textural inclusion, but for a few seconds during the high notes, there's a danger of Garvey sounding like Chris Martin. And you don't wanna be doing that.

In a sentence, then: There's so much more to Elbow than their creeping, bold singles and the subtle, almost holy delicateness of most tracks, makes this quite brilliant.
Posted by Suzy Norman at 17:30 No comments: 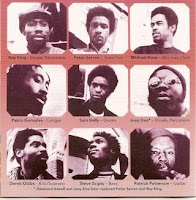 Suzy Norman
Suzy has been a freelance journalist for twelve years. She's also a novelist and editor.